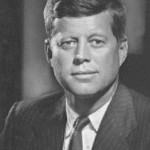 John F. Kennedy Elementary School, located at 2135 Woodland Drive, Dubuque, Iowa, USA, opened in 1965 to serve Dubuque’s growing west side. The late President Kennedy’s brother, Edward Kennedy, honored the Kennedy School community by coming to Dubuque to dedicate the school that year. Continued growth in this area resulted in the building of an addition in 1972, another addition in 2003, and the addition of 2 trailers in 2004.

During its peak years, with enrollment exceeding 700 students, Kennedy School was the largest elementary school in the state of Iowa. It remained one of the largest in the city and state with a student population of 665 in 2006-2007. With Carver Elementary being built on the west end of town for the 2007-2008 school year, it alleviated some of the overcrowding at Kennedy School by redistricting nearly 250 students to Carver.

In 1990, Patrick Kennedy, nephew of the late President Kennedy, came to our school to celebrate our 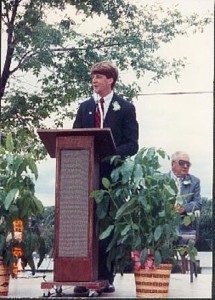 Patrick Kennedy, nephew of JFK,
visited our school in 1990 to re-dedicate it
at our 25th anniversary celebration. (1990)

25th anniversary. We were once again honored to have a relative of John F. Kennedy come to see what a wonderful school we have and to serve as a key-note speaker at our celebration. He re-dedicated our school and presented a bust of his uncle to Kennedy School. We proudly display this bust in our school’s library.

In the spring of 2001, Kennedy School was honored yet again to have a representative of the Kennedy family visit us. Caroline Kennedy Schlossberg, the late President Kennedy’s daughter, arrived for a tour of our school. We presented a school sweatshirt to her that she wore as she strolled the halls.

A warm and caring relationship exists between Kennedy School and its parents. A strong volunteer network makes the school succeed in all areas, from re-shelving library books to organizing fun family nights for the Kennedy community.

Kennedy School has adopted a philosophy of “Character Counts” education. Not only do students learn academic subjects but they also learn how to become ‘young citizens with character.’ The staff at Kennedy School are preparing students to become productive members of the 21st century.

Kennedy School’s opening was delayed when construction was not completed on time in 1965. Kennedy students were to start school a week later than the rest of the district. Then, construction was still not complete! The school board voted to send Kennedy’s 540 students elsewhere until November of that year! Kindergarten was held at St. Peter’s Lutheran Church until the classrooms were complete. Classes were in the gym and in the halls when the school opened until all of the classrooms were complete. Classes were even held at 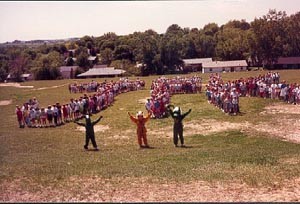 Kennedy School was able to be built because of a $1.8 million bond referendum that voters passed in 1963.

At its highest usage, the kitchen provided nearly 800 lunches each day!!!

The addition of two classrooms built on the Southwest end of the building in 2003 cost an estimated $220,000!

In 1970, instead of building an additional school in the West end of Dubuque, Kennedy School built two more classrooms (SW and SE corner rooms).

In 1974 Kindergarten moved to the basement.

Because enrollment was on the rise, the teachers did not have a lounge during the 2002-2003 and 2006-2007 school year. Instead, the music room moved into the old lounge and the teachers ate lunch in the library!

During the summer of 2002, air conditioning was added to the LRC, and the entire North end of the building, which included all of the fifth and sixth grade classrooms and the counselor’s office!

Starting with the 2005-2006 school year, Kennedy School became a K-5 elementary school. All 6th grades were removed from the Dubuque schools and sent to the 3 middle schools. 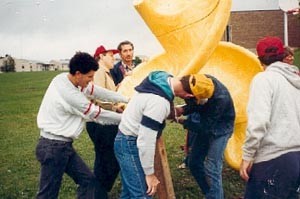 Kennedy School has had 6 principals since 1965: 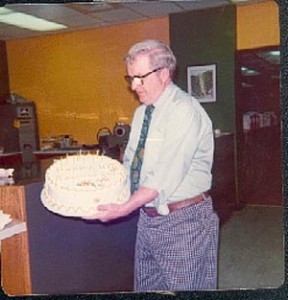